The best travel experiences are always fraught with drama, uncertainty and moments of anxiety. That’s exactly how I was feeling when the bus driver dropped me off at a muddy patch of land near Parque Tayrona in northern Colombia. The sign certainly indicated I was in the right place, Posada San Rafael, where I intended to rent a cabana for a few nights while hiking Parque Tayrona.  However, there was no one around and no clear place for me to ‘check in’. It looked more like a farm than guest cottages. Near the main road was a large cement building that looked like a central meeting place, several little family homes scattered around in the distance, and various dirt paths led in all directions. But no cabanas. Or people. As the bus drove away, I stood there wondering where to go. After 45 minutes of sheer confusion and anxiety, walking down one path and then another, speaking with at least three different ladies, scaring a couple of little girls as I nosed around, I finally established why I was there and that I was in fact at the right place.

Once I settled in, I absolutely loved Posada San Rafael. The quaint but clean cabanas were more comfortable than some mid-range hotels I’ve stayed at. A communal area where all the meals were cooked and served was in the middle of the cabanas. It was a simple thatched shelter with no walls, and a satellite TV mounted in the corner. A great place to escape the sun and the rain, and catch up on novellas with the family. The area was surrounded by lush green Colombian jungle. Mango trees, papaya trees, dozens of different types of flowers. Chickens wandering around. And bugs. Lots of bugs.

This is my kind of travel. No other tourists. Complete cultural immersion. Personal connections with locals. There were two families who ran the posada during my stay. Each had a teenage son and a little girl. When I wasn’t hiking, I just hung out with them, sharing meals, watching novellas and reading in the hammock. The little girls (Maria, 6, and Angela, 5) and I had a blast playing many familiar games from my childhood. Only the words were different. Tag, musical chairs, Simon says, red light green light. I taught them English words, and they taught me Spanish words. We made up games using our imagination and random things we found in the surrounding jungle. 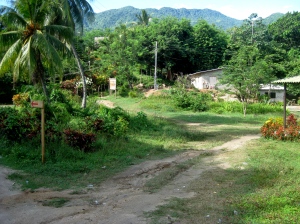 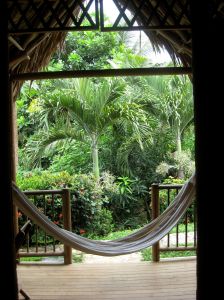 But as it was time to leave my heart sank. Unfortunately, I had not prepared for having no access to ATMs or credit cards. I had suspected this was the case when I arrived, and tried my best to be extremely frugal with my funds. When I got my bill for the Posada, I was 22,000 pesos short…and that was if I handed over literally all my money…including my transportation money. I felt absolutely horrible. 22,000 pesos isn’t a lot to me (~$10), but I’m guessing it is to this family. I had such a lovely time, I wanted to tip them generously, not stiff them. But with no ATMs and no credit card machines anywhere in the vicinity, I didn’t know what to do. Despite my best efforts, I started crying when I confessed I was short. They were very kind and forgiving, and we moved on to the next problem. How was I going to get back to Cartagena?

I was penniless. I couldn’t buy a bottle of water, a soda or snack bar, let alone a bus ticket. (It’s amazing how thirsty you get as soon as you realize you can’t buy water.)  To make matters more complicated, it was the day of presidential elections, so the collectivos and buses in the area weren’t operating. Fabio and Marisol made at least 20 calls, with no luck. I offered to pay someone double, triple the price to drive me to the next ATM (an hour’s drive), but no one was willing. So Fabio and I walked down to the Parque entrance to try to hitchhike, to beg someone, anyone, to take me to a bank in Santa Marta. We waited and negotiated and waited more. No luck. At last a ‘vehicle’ pulled up with five other tourists inside and one open seat. They agreed to spot me the money and take me to Santa Marta.

A jalopy would be a more accurate description of the vehicle. It was essentially a wooden box on wheels. A roof but no windows. Three little wooden benches that sat 3 people each. One row for the driver and his helper, the other two for tourists. The ‘door’ was a small metal gate with a latch that didn’t stay shut. As we drove down the highway, it would randomly fly open, and I had to constantly reclose my door. After a while, I just let if flap around in the wind. It looked like something you’d drive around a carnival. But instead of a carnival, we drove 45 minutes on a highway, with no seatbelt, no door, no windows. We broke down twice and got rained on, but never once did I complain. I was on my way to an ATM and there was nothing that could dampen my happiness. Having absolute zero money is an extremely uncomfortable and vulnerable feeling.

When we arrived in Santa Marta, the driver helped me find a taxi to take to the train station, and I handed over the equivalent of $2. All this drama for $2! Although my Spanish had improved greatly, I wasn’t really up for any additional delays or detours at this point so I greatly appreciated his help with the taxi. I arrived a short time later at a bustling, chaotic bus station, and I tensed a little thinking of the mental energy I’d need to spend to find the correct bus. Luckily, the taxi driver shouted out “Cartagena” and someone in distance shouted “Si”, so I headed toward that bus and settled in for the several hour drive to Cartagena. About half way there, the bus was pulled over at a military checkpoint. We had to disembark while the Colombian army, armed with machine guns, checked our bags.  It seemed quite routine, but it was a little surreal for this American in Colombia.

Later that night, I went out to dinner and ordered a glass of wine to celebrate the end of quite a day. The waiter said he’d be right back with my coffee and milk. Wha?? My Spanish isn’t that bad!! Apparently, businesses are not legally able to sell liquor during presidential elections. Therefore, I sat in the square, sipping my ‘coffee’ and reflected on the last few days. I never would have made it back to Cartagena without the help of so many generous Colombians. I’d be lost, stranded and starving without them. Many Americans have a misperception that Colombia is dangerous and full of bad people. I’m sure there are some bad people (as there are in any country), but I only met amazing people willing to help me out when I needed it. My time in Parque Tayrona was the happiest, most confusing, stressful and relaxing time that I can remember. 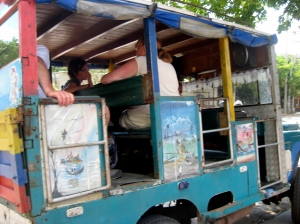