There’s something cathartic about crying in the rain. The rain washing away the tears. Releasing unrealistic expectations of yourself. Accepting reality. Somewhere around Virginia Canyon in Yosemite National Park, I had my moment. It was not pretty.

Up until a couple of days before, I wasn’t sure that I was going to make the Yosemite trip. My right hip had been giving me problems, and adding the weight of a fully loaded backpack only compounded it. But I didn’t want to miss the trip. It was an incredible opportunity to spend time with the founders of Clif Bar. Gary was sharing his favorite place in the world— in the world— with us! I did not want to miss it.

The pain continued, so I told my body if it wasn’t up for the challenge we wouldn’t go. I had all but resigned myself to staying home when I woke up the next day, a week before we were scheduled to leave, with my leg feeling great. Seriously, leg? Idle threats? As I gradually began testing it more, I felt strong and confident that I could do it.

So it was incredibly frustrating to me when on Day 3 of the eight day hike I had a total meltdown. Complete and utter meltdown. I had been strong the days before, and I had started out strong that day too. But as the day wore on, I slowed and the pain increased. Just make it to that tree, I told myself. And then that tree. I could barely make it 20 steps without stopping. A convergence of multiple factors was making it more and more difficult. Sharp, cutting pain in one hip. The other hip being rubbed raw by my backpack. My shoulders burning. I felt sluggish from not eating enough food. My legs so heavy it felt like I was walking in knee-deep mud. It was raining and cold. And I was frustrated with myself. Really, really frustrated.

As my frustration reached a tipping point, I threw my pack down, sat on a fallen tree and let loose a diatribe of internal insults. I was pissed at myself. Pissed at my body. I felt pressure to keep up with the others, but knew I couldn’t. Not that day. I wanted to quit. I’ll never make it, I told myself. I can’t do it. Why can’t I take relaxing vacations like normal people?

Chrissy and Alyson caught up with me, and I could no longer hold back the tears. They waited for me to cry it out. Chrissy patched up one of my hips, and I slugged along, struggling for composure. Soon the mental struggle was far greater than the physical. As we passed beautiful landscapes, I just stewed. I was giving Mother Nature major stink eye.

One of the only pictures I took was one to ironically document where I had my second meltdown. Balling so much in the rain that I made our guide cry too. I no longer knew why I was crying. She listened, encouraged me. And something shifted. I resigned myself to move at a turtle’s pace if that’s what it took.

Soon we were on the path less traveled, or the ‘white road’ as we call it at Clif Bar. Really, this was no road at all. We were off trail, walking through tall grass, around and through brush, over streams, past a waterfall. Something about this calmed me; focused on maneuvering over the terrain instead of the pain. (You also can’t hike very fast when you’re not sure where you’re going, so that suited me just fine.)  I was feeling exhausted, but no longer hopeless. We finally arrived at camp, and as I crossed the last stream and hobbled up the final little hill, I discovered that Gary, knowing I was struggling, had hand picked a spot for my tent. I felt so much relief setting down that heavy backpack. Unburdened and light again. Both physically and emotionally.

As I soaked in the beautiful scenery, awed by our secluded campsite alongside a waterfall, I reflected on what I had just accomplished. I had felt like a total failure that day– and if I’m being honest, it still irritates me quite a bit. But the reality is I had just hiked about 10 miles with 40 extra pounds on my back at an altitude of ~2900 meters in about 5 hours or so. What was I crying about? Who cares if it wasn’t as effortless as I had wanted it to be! I did it. I did it! And if I hadn’t done it, if I had quit, look at all I would have missed. 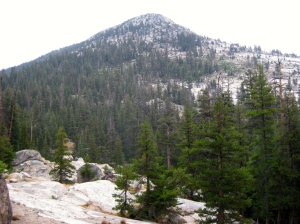 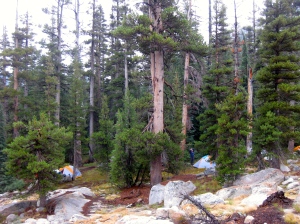 One thought on “Meltdown in Yosemite”