We rode our scooters up and down the same busy stretch of highway again and again. We were in Nyaung U, Myanmar searching for a restaurant specializing in tabletop buffet-style Burmese cuisine.  After a few failed attempts of asking for directions, two very kind women not only gave us directions, but let us follow them on their scooters so they could point it out to us. Myo Myo’s only English sign was tiny, and simply said Myanmar Rice House.

We walked through the outdoor patio, and stood tentatively in the main room. I’ll admit, sheepishly, that if I had been alone I would probably have fled. This was REALLY local. But before I could form a rebuttal, a waitress had us seated, and not more than five minutes later the feast began. A platter of 25 dishes was presented. No questions asked. No menus presented.

Myo Myo is in a nondescript, plain cement building typical in developing countries. Outside, tables sat under branded umbrellas. Inside, the pale green walls and a Buddha shrine encased in neon lights gave the place a strange glow. Framed pictures hung proudly on the wall. One of an older couple and two more that looked like graduation pictures of, which we presumed were, their children. Long wooden communal tables and chairs were packed with locals. A long narrow walkway led to the kitchen with the staff bustling back and forth, shouting at each other, buzzing with extreme efficiency.

All and all we had 25 separate buffet dishes and two desserts. We started with the more familiar ones, working our way to the scarier ones. We sampled all but five, opting to skip the dried fish heads and anything that looked like liver or heart. Some we gobbled up, we picked at a few, and pushed our forks around the ones we found unappetizing, daring the other to try it. There was chicken and beef curry. Not creamy curries like in Thailand, but oily curry, apparently to keep the flies off. Watermelon, bananas, asparagus, chicken soup so spicy that it would make even the toughest Texan sweat. I can’t name the other dishes.

When it came time to pay, a man walked over and began counting our dishes. We suddenly had a sinking feeling that you only paid for what you ate. Rather, you only paid for what it looked like you ate. Confirming this was not so easy given the language barrier. Instead, we just gave him the amount he wrote down. The equivalent of $3 or 5USD. We wouldn’t find out for certain that this is definitely how buffets in Myanmar work until several buffet meals later. Slow learners. So while Burmese food is certainly delicious, food safety is not a top concern.

My sincere apologies to those who most definitely got the leftovers that we picked at, took out and then put back. I’m especially sorry about that piece of gizzard I spit out.

Here are pictures from Myo Myo as well as other great meals in Myanmar. 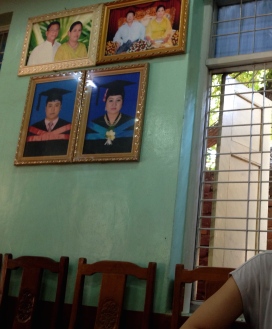 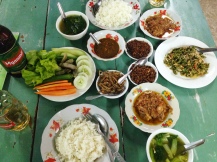 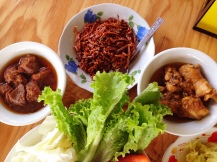 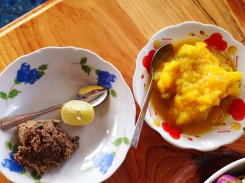 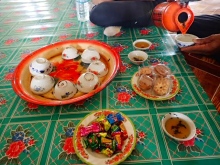 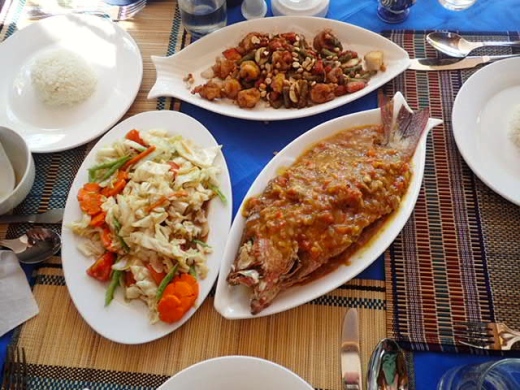